Kootenay Gallery of Art – Building the World We Want (2016) 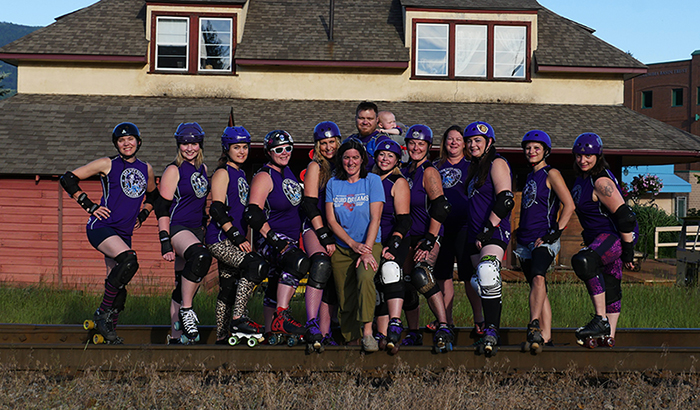 Each of the five segments presented in Arc begin with images pulled from our archives across the Kootenays. When paired with the photos shot within the last year, a story emerges, telling how our region and our ways of life have shifted over time. The common threads between pieces reveal hard physical labour shifting to recreational activity, institutions changing forms, immigrants re-inventing culture and emerging economies challenging traditional ways of life.

The Doukhbour women pulling the plough in the fields disintegrates into the Dam City Rollers women’s derby team. The sternwheeler, Minto, after serving decades as the transportation machinery of our watered region, was deemed worthless, and sent to a ‘Viking’s Funeral’ in Galena Bay, yielding way to the newly built highways across the region. The Italian immigrants pose for a wedding photo inside a studio. In the same ‘Gulch’ neighbourhood of Trail almost 100 years later, a family gathers outside around a same-sex couple celebrating their legal marriage. Pioneers to the region, like the Nelson prospector, merchant, historian and musician, R.G. Joy, laid the infrastructure for what would become a haven for outdoor enthusiasts. The First Nations salmon fisheries, like Celilo Falls, were decimated by the building of the dams, tearing apart traditional ways of life across the region.

I wanted the constraint of using only two still images to challenge traditional models of storytelling, which rely on plot points to move us forward along the narrative arc. Here, I want viewers to complete their own story, as a reminder to actively engage with our media, rather than passively consume.

Images often limit our understanding of history and current events, both by how they are framed and through what lens. Another goal for Arc was to reimagine how we use still images to create our collective history, providing more context and literal space beyond the headline, hook and thumbnail image.

I consider each segment a visual poem, a meditation on the passage of time, distilling decades into seconds, connecting the past and present, posing questions about how we may move forward through an ever-changing landscape.

Arc was a collaboration between Amy Bohigian – Director, Daryl Jolly – Animator and Havelock John Tucker – Sound Design and was made possible by a major project grant from Columbia Kootenay Cultural Alliance.